Hi all! The first weekend of October was certainly an eventful one. It was time for OctoberWest once again! Each year, our Prescott campus has a celebration of the anniversary of Embry-Riddle’s founding. We call this “homecoming” week OctoberWest, and this year we celebrated 90 years of Embry-Riddle legacy!

One of the main events of OctoberWest is the Wings Out West Airshow, held on Saturday Oct. 3rd at our own flight line. Each year from 10am to 12pm, the Prescott airport is shut down and reserved for the airshow, a private show for Embry-Riddle students, faculty and their families (just another benefit of being an Eagle!).

This year the airshow was kicked off by a parachute jump executed by Rex Pemberton, a very well-known and young parachutist with hundreds of successful jumps under his belt. As he descended back down to the surface, Melissa Pemberton, a champion aerobatic pilot, circled around him in her Edge 540 Matt Chapman performs at the Wings Out West airshow this past Sat.

aerobatic airplane as the National Anthem played. After both were back on the ground, Patty Wagstaff, veteran member of the U.S. Aerobatic Team and three time U.S. National Aerobatic Champion, performed a breathtaking aerobatic routine that had all eyes turned skyward. Also performing amazing aerobatic routines were award-winning aerobatic and airline pilot Matt Chapman, as well as seasoned aerobatic pilot Bill Stein. Melissa Pemberton also performed and awe-inducing routine that included cutting a ribbon strung above runway 21L while inverted! As part of the Flight Team, my teammates and I helped out with crowd control throughout the event. Victor and Ian (our Captain and Chief Pilot) also performed in the airshow in one of our 1965 Cessna 150s. They demonstrated two of our flying events: message drop and a power-on landing. Spread out on the Riddle ramp were several general aviation airplanes, helicopters, and even an Embraer ERJ-175 commercial airliner flown in by Skywest Airlines! These aircraft were on display throughout the airshow, each one unique in its own way. Hello, I hope you have been enjoying the topics I choose to write about in my blog so for. So, if you don’t already know last weekend at Embry-Riddle in Prescott, Az, we hosted what we call OctoberWest. OctoberWest can be explained in a few short words, Awesome, exciting, and a ton of fun!

Octoberwest is full of a lot of different activities, so starting Friday. Small paratroopers are placed/hidden around campus and on each one is a card and with each card is a prize! some of the prizes this year consisted of a thousand dollar scholarship, video game system, laptop. Then in the evening at 4, the festivities begin with a handful of free item like tee shirts, glow sticks, coffee mugs, food! Among this are activities like the RC plane show, pugil sticks and a few other fun competitive activities. Oh I can’t forget the great fireworks show they held!

But fortunately Friday evening doesn’t hold all of the fun, the next Saturday is the airshow! that’s right what could be better then having an airshow in your own backyard. its Amazing! On top of that this year they were offering B-52 rides! For all those that helped out with the events and for those that wanted to pay received a spot to ride. 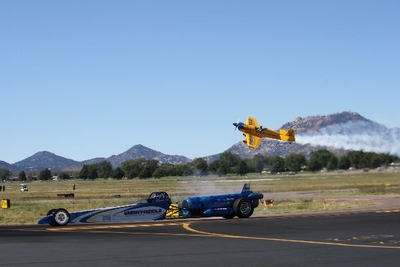 But I have to say one of the best things about Octoberwest is meeting new people and seeing friends. Its an event that not only brings the school together but the community.

Although there is more, come check it out for yourself next year at Embry-Riddle. Thanks for reading.