Last week was very exciting for me…I took advantage of the cash for clunkers stimulus.  Our family had been talking about getting rid of our 18 year old Jeep Cherokee, but since I needed a car it never seemed like a good time.  When we heard about cash for clunkers, I realized this was the golden opportunity.  We figured it would go until November, as the government had planned.  Well, my dad got a call Thursday afternoon from an auto dealer saying they just received an email letting them know the government was cutting the program off at 9pm due to a budget shortage.  The entire 250,000 car stimulus was used in one week!  So when he got home and told me, we rushed over to look at a Dodge Caliber he had seen.  Upon arrival, an older couple was already buying the car so we started strolling around.  One of the salesmen came up and told us another one had just come in that day, so we went to see it.  This one was the SXT Sport and, unlike the other Caliber, it had tons of features.  It had never been test driven, or driven at all for that matter except to get gas.  I ended up buying the car for $8,000 off sticker price with the Chrysler discount and turning in our old Jeep.  For a few minutes we were freaked out because we couldn’t find the Jeep title, which was necessary for the trade.  So after 4 hours at the dealership, we finally drove my new car home.

I realize now I forgot one small detail; it’s a manual transmission.  So, for the past week, I’ve been going around our neighborhood with my dad learning stick shift.  I’m already fairly proficient and last night we practiced starting up on steep hills.  It’s a really cool car and I look forward to bringing it to ERAU this year.

Here’s a picture of the car, the color is surf blue pearl I think: 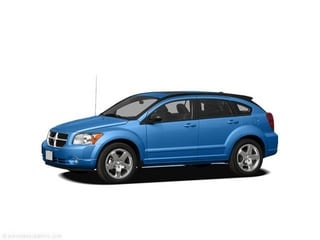